PBI Honduras in 2021: accompanying in the face of increased criminalization

Forty years after Peace Brigades International was founded and at nine years since we first arrived in Honduras, we are continuing to provide integral accompaniment to organizations and human rights defenders at risk: "International presence is the indigenous communities' bulletproof vest" (Donald Hernández, coordinator of CEHPRODEC).

In 2021 in Honduras, we saw an alarming increase in the criminalization of land and territorial defenders. As a result, we sought to counteract criminalizing discourses and provided accompaniment to organizations such as the National Union of Rural Workers (CNTC), MILPAH and ARCAH throughout a number of trials and hearings brought against them. We also monitored the hearing against the eight defenders of the Guapinol River as well as the trial of David Castillo where he was found guilty as co-conspirator of the murder of human rights defender Berta Cáceres, who was coordinator of COPINH at the time of her assassination.

Despite the shadow cast by the pandemic, we have continued to increase our physical presence in the country, accompanying defenders in at least 207 activities, according to the information gathered in the 2021 Infographic. Most of these activities were related to the defence of land and territory, women's rights, LGTBI+ community rights, processes of criminalization and impunity, and freedom of expression.

Alongside physical accompaniment activities, during the year we held 53 meetings with the international community and diplomatic corps, as well as 65 meetings with national authorities. In these meetings, we dealt with a wide range of issues ranging from the constant pressure on land in Honduras and the implementation of mega-projects such as the Employment and Economic Development Zones (ZEDE), to the functioning of the National Protection Mechanism and threats against the LGTBI+ community. To contribute to the security of accompanied organizations at risk, we also carried out 15 capacity-building activities, with integrated digital, psychosocial and gender approaches.

At the same time, we succesfully strengthened our communication and advocacy activities by opening a Twitter account and through several publications. Among them, we would like to highlight the report 'In search of comprehensive protection for sexual diversity in Honduras', in which we followed up on the recommendations contained in the Universal Periodic Review (UPR) to which Honduras was subjected in November 2020.  As in previous years, virtual tools helped us to make the voices of defenders' more widely known. For example, we organized a virtual advocacy tour of the United States with the Broad Movement for Dignity and Justice (MADJ), where members were able to share their perspectives on the negative impacts of the Jilamito hydroelectric project.

During 2021, on our journey creating new spaces for peace, PBI felt very much accompanied ourselves, thanks to the solidarity and commitment of our donors, the twelve volunteers in the project in Honduras and members of PBI's Country Groups in Europe and North America.

In the new context in 2022 which brings to Honduras not only opportunities but also by challenges in terms of human rights, we want to highlight the essential role that human rights defenders play in guaranteeing the rights of the entire Honduran population. 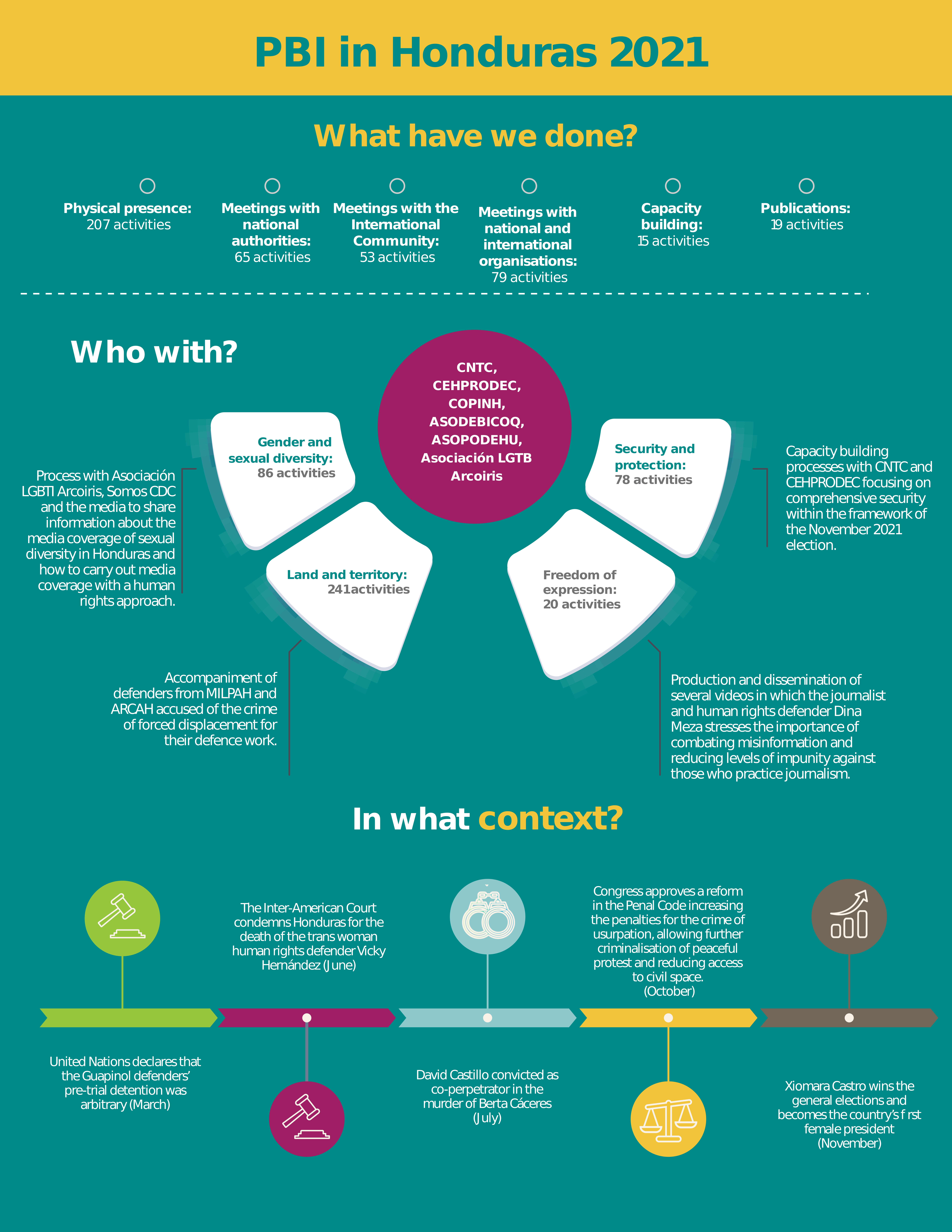