PBI Honduras in 2020: Further accompaniment in the face of limitations

2020 was a year defined not only by the questionable handling of the COVID-19 health emergency, but also by the impacts of hurricanes Eta and Iota. According to Centro de Estudios para la Democracia (CESPAD), these events, “have worsened food insecurity due to the lack of employment in the country, the depletion of food reserves, the increase in food prices, land and environmental vulnerability, and lockdowns”.

Since March of last year, human rights defenders and journalists have seen their freedom of movement increasingly restricted as a result of the suspension of constitutional guarantees. Due to their lack of inclusion in the exceptions to the lockdown proposed by the government, they have faced many obstacles to their in-situ verification of the human rights situation in the country, and in the undertaking of their important role in the management of the crisis in their communities and collectives.

Under this context, Peace Brigades International (PBI) maintained its presence in Honduras throughout 2020, seeking new ways to open spaces so that human rights defenders and their organisations could continue fighting for human rights, land and territory. Throughout the year, we were present alongside human rights defenders, even if only virtually, on 174 occasions, as shown in the 2020 Infographic. Accompaniments, observations, phone and video calls, and our constant monitoring helped us feel closer in spite of the distance and lockdown.

We also strengthened our political accompaniment and advocacy work: we undertook 63 actions with the international community, diplomatic corps, and international organisations, and 43 actions with national authorities. The increased number of criminalisation processes, the lack of peasant-focussed agricultural policies, and attacks against human rights defenders were some of the topics we addressed in these spaces. In order to contribute to the security of our accompanied organisations, we carried out at least 21 actions to build capacity, protection, and spaces for psychosocial support.

Despite restrictions on travel outside of Honduras, we contributed our efforts to ensure that the voices of women land and territory defenders reached Europe. In this vein, we carried out a virtual tour in November, where members of CEHPRODEC and MILPAH could share their concerns, problems and recommendations with European authorities regarding the Universal Periodic Review (UPR), which Honduras underwent in 2020. We also strengthened our communications accompaniment, using spaces like Facebook, our own web page, and the international media to raise awareness on the situation in Honduras.

All this was made possible by the commitment of the 9 volunteers who contributed to the field team throughout the year, of the various PBI Country Groups in Europe, Australia, the United States, and Canada, and of our donors. All these supporters kept in mind that in a turbulent context such as this, the role defenders play as guardians of the environment, freedom of expression, and human rights is essential. 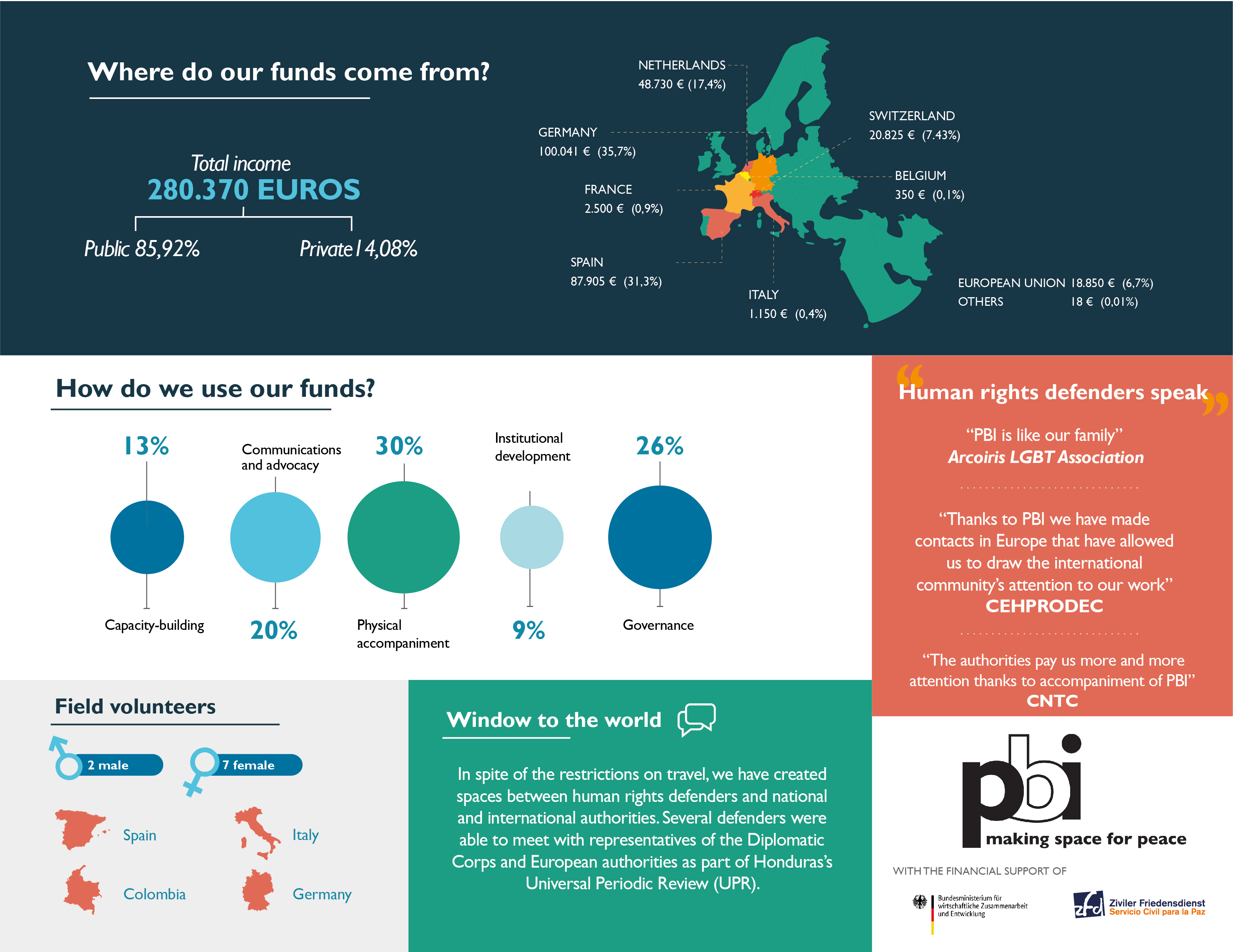