Another year putting human rights defenders at the centre

“I thank PBI for accompanying me in the defence of human rights and the exercise of journalism. Without this accompaniment, I think my name would be on a forgotten gravestone”. With these words, Dina Meza, journalist and director of the Association for Democracy and Human Rights in Honduras (ASOPODEHU) sums up the presence of PBI in the Central American country since its arrival in 2013.

During these seven years, the Peace Brigades International Project in Honduras has worked to open spaces to allow human rights defenders and their organisations to continue fighting for human rights, land and territory, and of course, for life. To this end, the PBI field team has been present alongside human rights defenders on at least 311 occasions through accompaniments, observations, and office visits, which aim to bring visibility to their human rights work and dissuade possible attacks as reflected in the infographic 2019.

Moreover, as part of our political accompaniment and advocacy work, in 2019 we held 46 meetings with national authorities and 56 with international authorities and the diplomatic corps. In these meetings, we expressed our concerns over violations of human rights and defenders’ need for protection. Similarly, we held up to 75 events to strengthen the security and protective capacities of national organisations.

Together with freedom of expression, criminalisation and impunity, and the defence of land and territory, another issue that we worked on in 2019 was the vulnerable situation of the LGBTQI+ community. In fact, last year we expressed our grave concern over the precarious situation of trans women and the murder of human rights defender and Arcoiris Association member, Bessy Ferrera. This situation led us to launch two alerts on the alarming increase in attacks against trans women that has continued into 2020. In fact, so far this year at least six LGBTQI+ persons have been murdered in Honduras, a trans woman among them.

In 2019, 8 human rights defenders had the opportunity to travel to the United States and Europe to share their perspectives on the situation in Honduras, and that of their organisations, with the support of PBI. In one example, two defenders participated in an advocacy tour together with other defenders from Mexico and Colombia. This tour allowed the defenders to bring attention to the central role that

women play in the defence of land, territory and the environment, and the specific risks they face as women. They also spoke to the need for differential protection mechanisms from the Honduran State. PBI Honduras reflected this situation in our contribution to the Universal Periodic Review (UPR), which we presented in September. The human rights situation in Honduras has also reached the wider world thanks to dozens of communications and advocacy actions undertaken in 2019.

All these activities were made possible by the commitment of the 15 volunteers who passed through the field team in 2019, as well as the various PBI Country Groups in Europe, Australia, the United States and Canada, as well as all the volunteers and donors who, from outside Honduras, contributed to the project’s day-to-day work. All this support places the true protagonists of our work – rights defenders – at the centre. 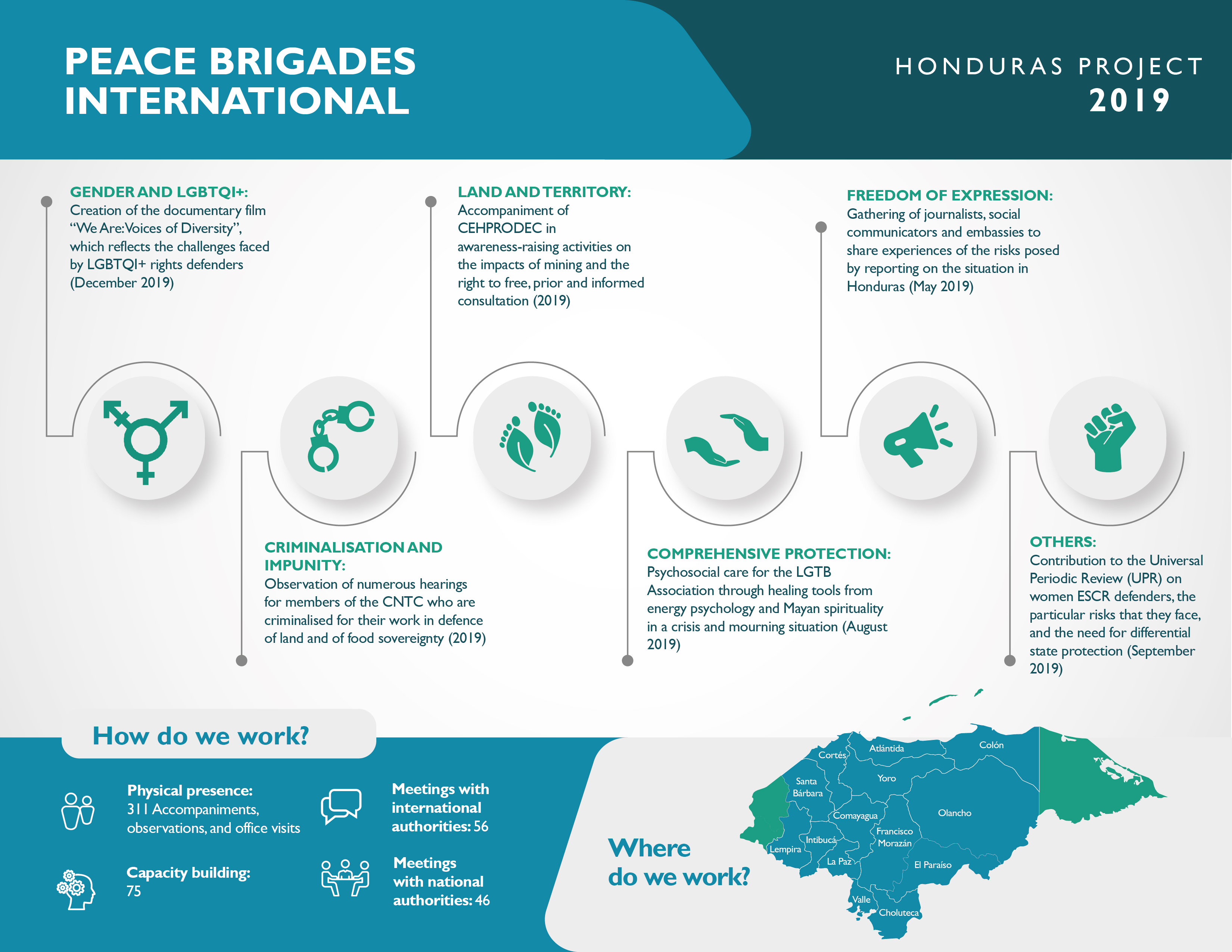